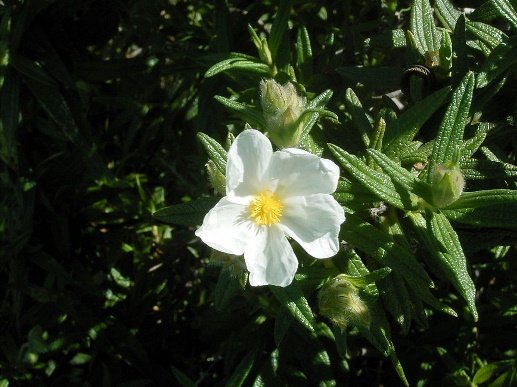 In March 1787 Dr John Sibthorp, a respected English botanist, having sailed through various islands and the coast of Asia Minor, arrived in Cyprus where for five weeks he studied the fauna and flora:

We went on shore, and after waiting three hours at Iftinia for horses, set off at eleven on an excursion to Fontana Amorosa. Riding three hours through a fine cultivates corn country we crossed a rivulet, and dined under an olive tree; among the corn I had observed the Bupleurum semicompositum and Ruta linifolia. After dinner our road led us over a rough steep mountain whose sides were cultivated with corn; we then traversed a stony plain, and in three hours’ time arrived at a large Greek village. We now descended towards the beach, having a view of the distance coast of Caramania. The Cistus monspeliensis was frequent on different parts of the road: the leaves of this species are used by the Cypriots as a substitute for the Mulberry leaf: we met frequently with peasants conveying home horse loads of this plant for their silk-worms. After riding for some time in the dark, we arrived at Poli; the Aga of the village, a venerable man, received us with much politeness, and having spread before us a frugal repast of yaourt and rice milk, he left us a retired to his harem.