Lorenzo Warriner Pease, the first American missionary to Cyprus, refers to St. George describing a picture he saw in a Cypriot church and commenting on the locals' worship of the Saint 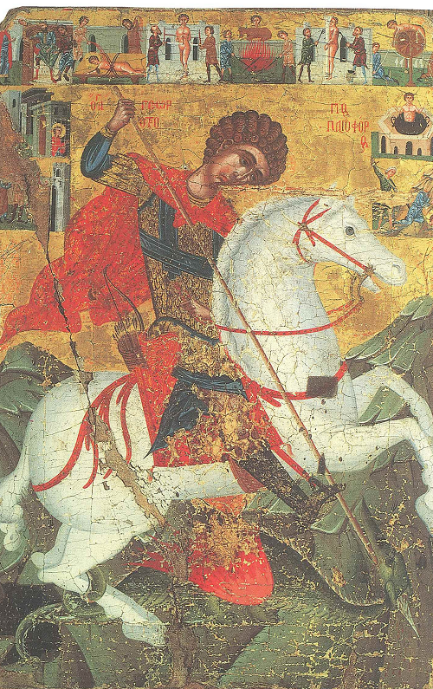 Lorenzo Warriner Pease, the first American missionary to Cyprus, refers to St. George describing a picture he saw in a Cypriot church and commenting on the locals' worship of the Saint:

This afternoon Antonio and I went to a church about an hour from here, where are several pictures of St. George one of which is said to sweat. It is about 8 by 10 inches. The Saint is painted in the usual rude style on horseback, with a golden boot and a silver crown set with glass. From his right hand descended two long pieces of silver, meant for spears perhaps. Handkerchiefs, wrist ornaments etc. were hung before it which had been left in payment for vows by visitors. Beneath the picture is a trough in the center of which is a small cup to receive the sweat of a saint! We saw no sweat on the saint but some water in the cup below his picture. I stayed about ½ an hour but he would not sweat and I was told that it was on account of my want of faith! Antonio wished to know if they could let us have a bottle of the sweat! Oh no they had not so much, but they could spare us a piece of cotton wet with it…The sick are sometimes brought here, and if they prey to the saint, he will sweat for their accommodation, but we must begin the operation when no one is present! Such silly staff is palmed off and believed.