Leontios Macheras, Cypriot chronicler attached to the court of the Lusignans, recounted the departure of the Saracens from Cyprus 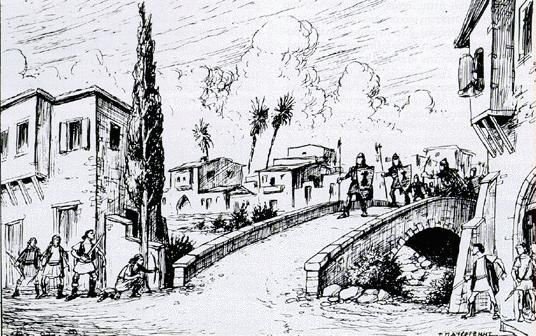 Leontios Macheras, Cypriot chronicler attached to the court of the Lusignans, recounted the departure of the Saracens from Cyprus:

And on the twenty-second of August the prince came to Lefkosia. Then the king sent Domenico de Palu the sheriff of Lefkosia to be in command of the army; and they took the royal standard and came to Lemeso. And when the Saracens heard of the coming of the army, they set an ambush; and eight men showed themselves and were trying to beguile our army and to make it attack them; and these eight Saracens were on horse-back. And our people began to run out to attack them. And a peasant saw the ambush from a high point of vantage, and came down and called out to them and prevented any one from advancing, telling them that there was an ambush in the back-ground. Then they turned and began to retreat. And when (the Saracens) saw that our army was retreating, then a good six hundred Mameluke riders in full armour dashed forward, and were coming steadily down upon our army. And the sheriff brought the army to Palamida, and there dined; and after dinner he went to Limnati. And the Saracens came to Palamida. And wherever the Saracens went, they burned every place. When the Saracens saw that our army had no heart to fight them, but was all the time retreating in flight to Lemeso, they embarked in their ships and went to Cairo.