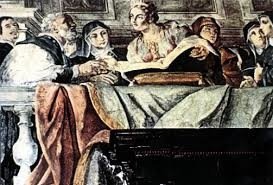 Leontios Machairas finishes his chronicle with the death of John de Lusignan:

And on Monday, the twenty-fourth of July 1458 after Christ (the same year in which his wife fell asleep) God did according to his will with our lord the king, king John de Lusignan; he was born on a Monday and he died on a Monday in the evening and was buried in St Dominic. And he died in the said monastery, and his daughter Charlotte also, who had herself been left widow by the prince who was called John of Coimbra. And the same day (the said Charlotte, the daughter of the said king John) was proclaimed Queen of Cyprus as was customary. And seventy days before her father died, her mother Helena also died; and may God admit both her and him to bliss.