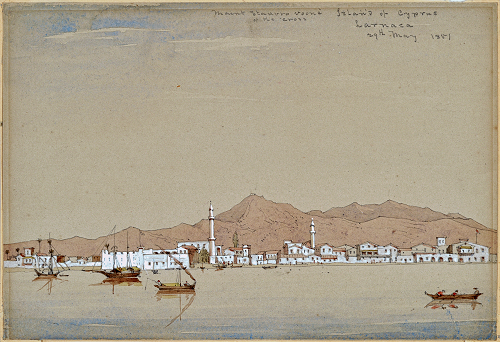 I landed at Larnica on the 26th of September, having seen the shore appearing on the east in a tract of low land, and in the west in a range of high mountains, the evening before. Here, in expectation every day of obtaining a passage in a vessel where the accommodations would be better, I was detained three weeks: and was at last, from so much time having elapsed, obliged to give up the thoughts of my expedition, and determine on taking the first conveyance to Malta. My residence at Larnica was not uninteresting. I had apartments in a detached pavilion of the vice-consul's, who was a Zantiot, and had amassed a considerable fortune from his office during the latter periods of the war, when every vessel coming to Cyprus bore the British flag. Though Larnica gives the name to the road in which vessels anchor, yet it is distant from the shore nearly a mile, and is detached to the east from the town which may be called the port, and bears the name of La Scala, about the same distance. This place contains the custom-house, and is the mart for trade. It consists of a long street, chiefly a bazar, where common necessaries of life and articles of dress are sold; is inhabited by Greeks and Turks; the latter commonly employed in the affairs of the custom-house, the former in trade. The houses are low, built partly of mud and partly of stone, whitewashed. The space between La Scala and Larnica is barren, as indeed is the greatest part of the plain at the foot of the mountains, which for several miles east and west of La Scala is either uncultivated or marshy land, intersected by salt lakes. The foundations of an ancient town are often found between La Scala and Larnica. The effects of the marshy land are evinced in the countenances of the natives, who suffer every year from agues and fevers, that diminish the population, and regularly appear in the hot months of June, July, August and September. When the Venetians had possession of the island, care was taken to drain the marshes and confine the water to the salt lakes, which produced an immense revenue; but, like all other sources of riches of the Turks, are neglected, though still productive enough to be a considerable article of trade.