Heavy taxation and the demand for Enosis were the cause of events in the early evening of 21 October 1931. Sir Ronald Storrs, then Governor of Cyprus, described what happened in his Memoirs 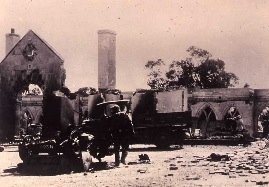 Heavy taxation and the demand for Enosis were the cause of events in the early evening of  21 October 1931. Sir Ronald Storrs, then Governor of Cyprus, described what happened in his Memoirs:

I was dressing for dinner when the Maltese stenographer announced that a disorderly demonstration was proceeding towards Government House. I telephoned to the acting Colonial Secretary and to the Commissioner. By this time a rapidly swelling crowd of several thousand had arrived at the gateway. One of the members of that crowd, author and doctor Kypros Chrysanthis, takes up the story:

-To Government House! shouted someone.

-We shall protest! We shall shout!

The members of Parliament came and were embracing each other as they do on Easter day at church. The little ones were screaming. The youngsters were singing heroic songs. The more reserved watched carefully and were wondering how to get away without losing face. Then an old woman, about sixty years of age, rose her arm holding an old rod and shouted huskily:

-Let's go ahead, for liberty!

As soon as the Commissioner was satisfied that definite attempts to set the house on fire had been made, he decided that rifle fire must be employed. A baton charge was first launched according to King's Regulations. The bugle sounded. The Riot Act was read and shouted in Greek. The bugle sounded again, and a police firing party of twelve men discharged a volley. The crowd dispersed, was pursued and fled. Already the curtains were ablaze. The fire spread to the roof and took hold of Lord Wolseley's old tinder barrack. In ten minutes Government House, and all that it held, had gone up in flames.