Giselbert, the chaplain of Count Baldwin V in 1175, describes the crowning of King Amalric of Cyprus 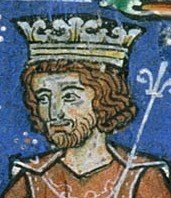 Giselbert, the chaplain of Count Baldwin V in 1175, describes the crowning of King Amalric of Cyprus:

The Chancellor, however, together with count Adolph and certain other friends, touched shore at Cyprus. For he had been sent by the lord emperor to crown the king of that island (Amelric) with a diadem. To be sure that same king had formerly been under the sovereignty of the emperor of Constantinople and in order to enhance the dignity of his fame had sought most desiringly to be crowned with the most glorious symbol of the Romans. And so he (the Chancellor Conrad) came to that place and was received magnificently and entertained lavishly. Once the business at hand was completed and after being given most exquisite rewards and all kinds of gifts as his status properly demanded, he set sail with his ships hastily for Acre.