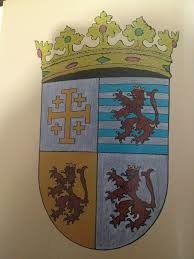 George Boustronios describes how King James came with the Mamelukes from Egypt and took over Nicosia and the throne of Cyprus:

King James sent Brother William with fifty Mamelukes and sergeants on foot to go to Lefcosia to give security to the people who had remained in the town and if possible, to arrest the sheriff Sir Hector de Chivides. All through, the sheriff had been keeping good watch, and a woman coming from Lefkomiati with bread said to him: “As I was coming on the way, I heard a great tumult and cries and blows and I think it was the Saracens.” And the sheriff did not believe her. He went down to the gate with five or six men and the police officer. After a little, the Saracens appeared. And when the sheriff saw them he went into thee town and by the upper gate went off to Kyrenia. The police officer was seized and so was the son of George Hatit. They would have killed the officer thinking he was the sheriff. Then they let him go. The Saracens went into Lefcosia and appointed the police officer to continue as he was. Nicolaas Morabit was appointed to be sheriff. And on the twenty sixth of September 1460 King James entered Lefkosia with a number of Saracens; and the admiral with the men of the fleet camped outside at St Dimitrios. He remained there for three days.