Fynes Moryson, a fellow of Cambridge, published his itinerary to Europe and the East between 1591 and 1596 in 1617. 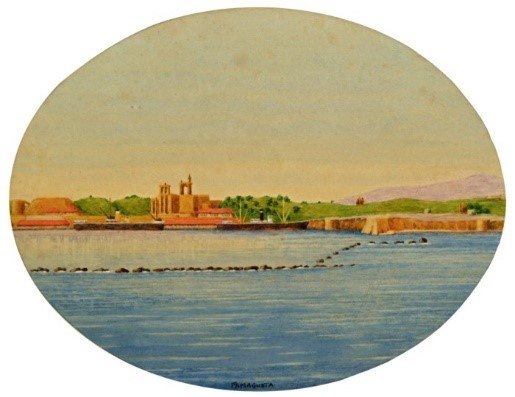 Fynes Moryson, a fellow of Cambridge, published his itinerary to Europe and the East between 1591 and 1596 in 1617. In it there is a short reference to his visit to Cyprus:

In twilight (for the nights used not here to be dark), we set sail and were forced to go back towards the west, along the shore of Cyprus, to the promontory called Capo di Gatti, that is, the Cape of the Cats, that we might from thence (according to the Marriners experience) fetch a fair wind. So we sailed that evening thirty miles (of Italy I mean) and the next day twenty miles to a village of Cyprus called Lemisso (where Christian ships used to put in). Here we cast anchor and all the sixth and twentieth day of May expected a wide, which we got at midnight following. Cyprus is an island in the same sea, and it is most fertile, yielding canes of honey, whence sugar is made, and rich wines, and abounding with many things required for life and for pleasure, and this island the Turks in the last age took from the Venetians by force of arms, the chief cities whereof are Famagosta and Nicosia. Lastly in Palestine, Cyprus and those parts, partly I understood by others, partly I found by experience, that it seldom rains, and that about September and October only, and not often at that time, but so violently for the time, as if it would beat down the very houses, falling (as it were by pailfuls at once, and that the fields are watered with night dews, at the fall whereof no man stirs out of doors, but with his head well covered, for danger of sickness, all men using to keep in the house till the dew dried, while in the meantime by day the heat is so excessive, as a man can hardly endure his apparel, though it be of linen or silk, if it hang not loose but be close about him.