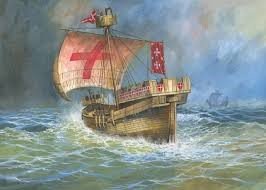 And on Saturday on 1 January 1474 in the year of Christ news arrived from Famagusta that: ‘the archbishop, Sir James and Rizzo have boarded a foreign galley belonging to King Ferdinand, and have gone away. On learning of this in Famagusta, moreover, they brought out two Venetian galleys and sent them in their trail in order to seize them. Furthermore, as soon as they learnt about this in Nicosia, they issued an order: ‘Let them seize their servants, wherever they might find them, and bring them to Sir John de Ras!’ And on the same day the archbishop’s nephew arrived with letters in which the queen sent word that: Let no one create difficulties for the servants of the archbishop , John (sic) Alberic and Rizzo until her ladyship should give orders!’ <Over which matter Sir John the Ras asked whether the Venetian galleys had indeed gone after them. And they told him: ‘They had ordered them [to do so] and they let things be.