French architect Edmond Duthoit in a letter to his parents: 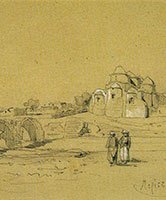 We saw at Peristerona quite a nice church with five domes preceded by a bridge of three arches on a waterless river but covered with pink laurels. The impression of this village is quite beautiful and though in a hurry, I made a small drawing. At about 2 o’clock in the afternoon we arrived at monastery of Xeropotamo. It is a big farm belonging to the independent monastery of Kykko of which I will talk later. Half an hour from Karavostasi we entered the mountain, the road runs across a river whose waterfall drop noisily. The sun gilds groves clustered with myrtles and laurels that are together with white pebbles the obligatory accessories of a river of the Orient. I do not remember if I have given you this definition of an oriental river by an author whose name I forget. “The rose laurels and white pebbles, of water there is no question.” this definition is right for ninety rivers out of a hundred. Here there was water, and plenty of water turning three or four mills of miserable appearance but whose walls whitened with chalk or made of stones yellowed by time, matched admirably with the greenery that covers them from all sides. The route that we follow is very good and the sites that it affords are the most varied. Here, terrible natural precipices with sharp and naked rocks, there is here as everywhere the danger of being killed over and over again; but flowers everywhere. Trees rise in clusters. At the edge of rivulets grow enormous plane-trees whose clear and pale greenery make a nice contrast with the dark green of the big fir-trees. It is the first time that I see trees in Cyprus but these are magnificent. The most beautiful oak is nothing compared to the plane-trees that cover the sides of the valleys of Kykko. It takes 8 hours to go from Karavostasi to Kykko. In order not to arrive in the middle of the night in a monastery full of pilgrims we spent the night at a village called Kambos.