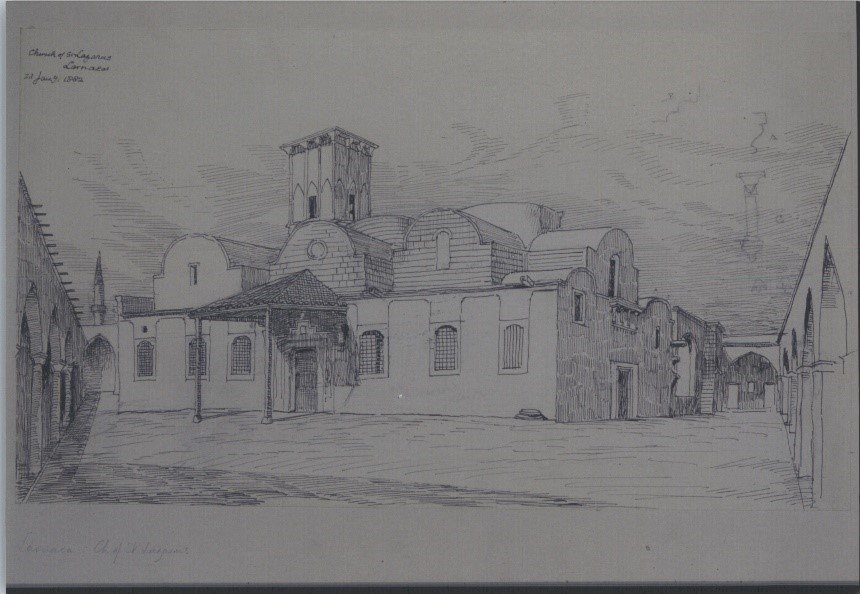 Fra Francesco Suriano visited Cyprus in August 1484 on his way from Jaffa to his native Venice:

We left Jerusalem, or rather Zapho, on the tenth of August, 1484, with the galley of Messer Augustin Contarino, and sailing for six days together over the open sea we arrived at the Salines of Cyprus. To this place came S. Paul with Barnabas from Seleutia. These Salines, as one reads in the chronicles of the island, were thus miraculously made. The whole plain was planted with vines, and as S. Lazarus passed by he asked from those who kept the vineyards a few grapes for the love of God. The alms was refused him, and he asked what there was in a basket which hung near. They told him it was salt, but it was full of grapes. Then he laid a curse on them and said, "May all these vineyards turn to salt." And so it befell, for from that hour the vines dried up, and every year the water (is turned to salt). These Salines are almost miraculous because the rain that falls collects without any art of man in a space a mile in circuit (and from under the earth some veins of sea water burst up, and mix with the fresh water which congeals, and becomes most perfect salt, white as snow, hard as stone, four fingers thick, and sweet as violets. And such a quantity is formed that were it all collected it would furnish salt in abundance for the whole of Italy. To keep ever alive the memory of the event a church was built in honour of S. Lazarus, in which I celebrated in token of my devotion. Here we stayed two days, and left it sailing always close to the shore, and the following day reached Limisso, a city entirely destroyed and overthrown by wars and earthquakes. Leaving this we came to C. Gavata, eighteen miles away: we call it the Cape of Cats.