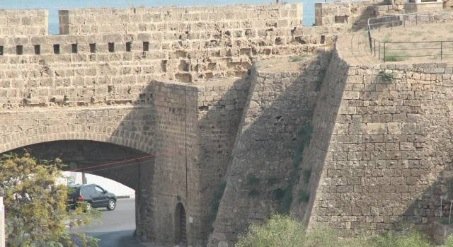 Fra Calepio gives an account of the siege of Famagusta in 1571:

On June 21 they fired the mine under the great tower of the Arsenal under the directions of Janpulad Bey: it shattered the wall, which was of great thickness, breached it and brought down more than have of it, splitting also a part of the parapet, which had been made to project and bear the brunt of an assault. Immediately a great band of Turks mounted on the ruins with their standards and reached the top. Captain Pietro Conte was on guard there with his company which was much shaken from the explosion. Senior Nestor Martinengo came up first with his company, and the enemy, though reinforced five or six times, was driven back and could not accomplish his purpose. Senior Baglione fought there in person…The Turks lost six hundred men and the Christian dead and wounded were a hundred.