Fra Angelo Calepio, Superior of the Dominican Convent in Nicosia, gives an account of the siege of Nicosia by the Ottomans 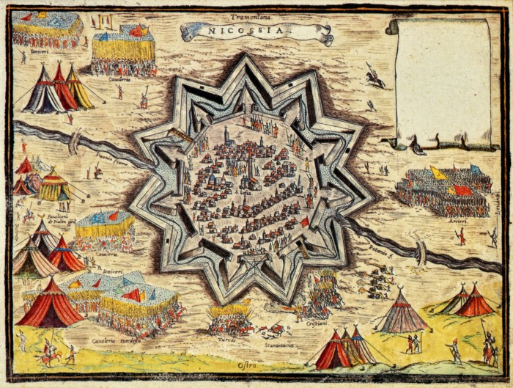 Fra Angelo Calepio, Superior of the Dominican Convent in Nicosia, gives an account of the siege of Nicosia by the Ottomans:

The next day they fired the mine under the curtain, but the result was of little use to them, and they waited to deliver a set attack, and went on widening and raising the traverses in the ditch, to secure themselves against attack. They had dug out all the earth near the counterscarp, and there they lodged in their tents, invisible to us. They brought up seven pieces of artillery on the wall of the counterscarp, so disposed that we could not see them, two on the ravelin of S. Nappa, one on the Antrucci, and two facing the battery of the curtain. They came with planks covered with raw hide to dig in the parapets, while we were not slow in hurling grenades among them, and in sallying now and then from the shelters to harass the diggers, but our losses were considerable. We restored the parapets with buffalo skins soaked in water, stuffed with wet rags and cotton and well bound up with cords.