25 June 1483: Felix Faber, a Dominican monk of Ulm, made and recorded two pilgrimages to the Holy Land and touched Cyprus twice: 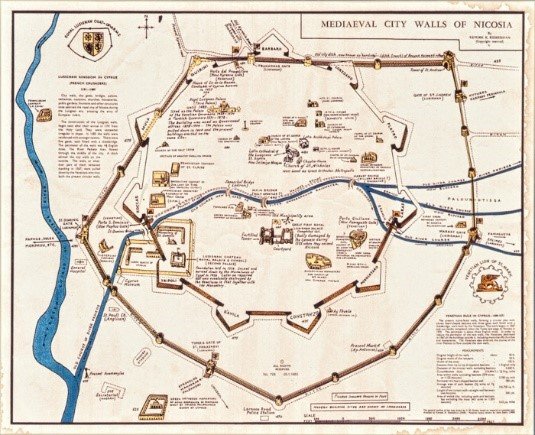 25 June 1483: Felix Faber, a Dominican monk of Ulm, made and recorded two pilgrimages to the Holy Land. He started on the first and shorter of these on April 14, 1480, and touched Cyprus twice.

“On Monday we came to Cyprus, and made for the harbour of Limovicus, because a contrary wind forced us to seek a port. When that died down we sailed to the harbour of Nimonia, to tarry there some days, because our captain had a brother with the Queen of Cyprus in Nichosia, with whom he had business, and we had to wait until it was done.”

“With good weather we returned to the port called Salina: there we took the weaker pilgrims to a town hard by, the sounder of us went with our captain on hired horses to Nychosia, which is the metropolis of Cyprus and the royal residence, six German miles from the sea. It is an ancient custom that the knights of the Holy Sepulchre present themselves to the king of Cyprus and make with him a kind of pact.

He calls them his companions, and enters their names in a book, and gives them a silver dagger in a sheath with a belt for it, and at the end of the dagger hangs a silver flowret like a violet, in token of the alliance between them. For this reason my lord Georius de Lapide, whom I never left, with other nobles entered Nichosia and stayed there three days. But because the kingdom of Cyprus has now no king, the nobles begged of the Queen to be received into the companionship of the kings of Cyprus.

She summoned them to a large banqueting hall, and when they were set before her proposed to them through an interpreter the statutes of that companionship, which are: that they should strive to help the kingdom of Cyprus in its need, since it lies midway between Saracens, Turks and Tartars.

They pledged their faith to the Queen with their hands, and she delivered to them the daggers, and allowed them to depart. We then returned on horseback to the sea. Moreover we passed on the road the skirts of a certain very high mountain, on the crest of which is a chapel, in which they told us is set the cross of the thief on our Lord's right, suspended in wonderful wise, which I would gladly have seen. But I had no time, and so put this off until my second pilgrimage.”