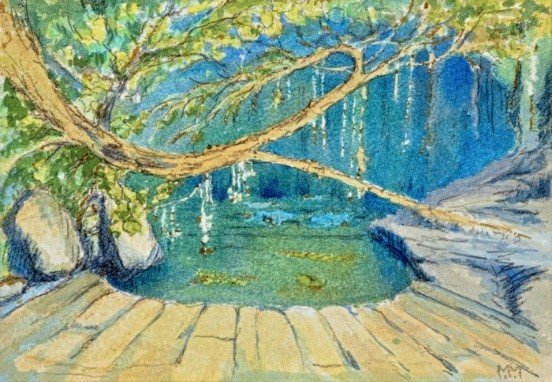 At six we set out for Fontana Amorosa, which our guides informed us was little more than an hour distant from Poli. We descended towards the coast, and having turned a considerable mountain, arrived in four hours at a small spring; this we were informed was the famous Fontana Amorosa, which had so greatly excited our curiosity. Among the stones of a ruined village we observed the Lacerta stellio, the same which Tournefort had found among the ruins of Delos; and on the sides of the mountain I gathered the Centaurea behen, and the Cynara acaulis, and the Thapsia foeniculifolia; and under the shades of some trees hanging over a rivulet the Osmunda cypria. Our guides, who had contrived to mislead us, after eight hours brought us back to Poli; they now refused to set forward for Bafo, alleging their horses were tired.