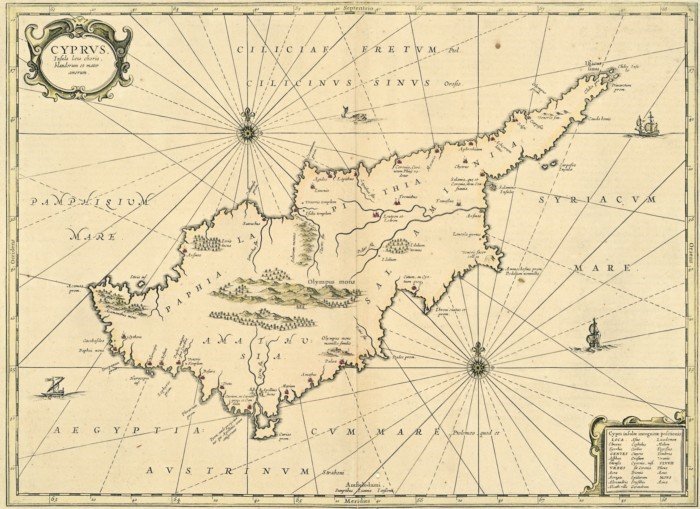 The north part of the island of Cyprus is fifty miles from the Cilician shoar, which agrees with the account of the antients, who making a computation by measuring round the bays of the island, say that it is about four hundred twenty eight miles in circumference; but those who computed, probably by travelling round the island by land, make it only three hundred seventy five miles. Some say, that it was a hundred and seventy five miles long, others two hundred ; but the modem sea-carts make it only one hundred and thirty five in length, and sixty two miles broad in the widest part. Cyprus was antiently divided into many Kingdoms, and was conquered successively by the Egyptians, Phoenicians, Cyrus King of Persia, and Alexander the great; it fell to the lot of the successors to the Kings of Egypt, afterwards was subdued by the Romans, became subject to the Greek Emperors, and, whilst it was under them, was laid waste by the Arabs. In one thousand, one hundred ninety one, Richard the first. King of England, conquered it, and gave it to Guy Lusignan, King of Jerusalem; and his family continued to govern it until the year fourteen hundred twenty three, when it was taken by a Sultan of Egypt, who permitted their own King to reign over them, on his paying him a certain tribute. In one thousand four hundred seventy three, one of the Kings left this island to the Republick of Venice, who enjoyed it, paying the tribute to Egypt, until it was taken from them in one thousand five hundred and seventy under Sultan Selim, and it has ever since remained in subjection to the Ottoman port.