Edith, wife of Consul General Taylor Belcher, in her diary, reflects on the tension of those days in Cyprus 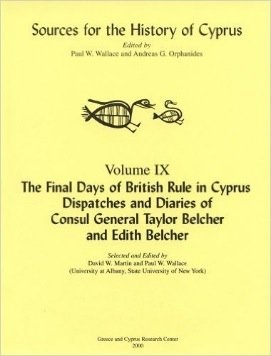 Edith, wife of Consul General Taylor Belcher, in her diary, reflects on the tension of those days in Cyprus:

I dragged Toby off early- he is not well and terribly concerned over the coming week. It was just before we left for the air reception tonight that Dimmy Demetriou came in before returning to Larnaca. He had been to the football match at this stadium this afternoon. He informed Toby that if parade permission was not granted this Tuesday, he knew there would be serious trouble! he said that if permission was given, he could give a guaranty that nothing would happen; but if this grant was not forthcoming, he could not give such promise. He was hoping Toby could give some advice where it counted and Toby said he would be present tonight where he could speak to those high up possibly.