Edith Belcher, wife of the US Consul General, describes the beginning of the intercommunal troubles 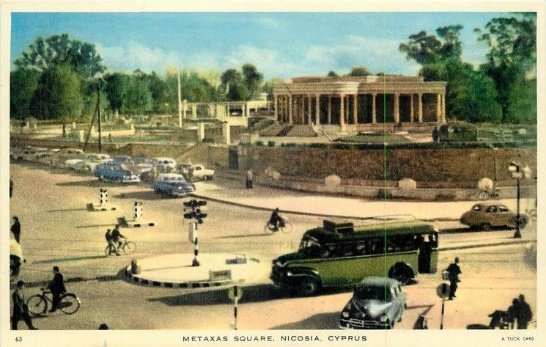 Edith Belcher, wife of the US Consul General, describes the beginning of the intercommunal troubles:

Paul drove me home in my car. As Paul and I drove by Mayor’s office on Metaxas square several truckloads of soldiers poured out of the gate and headed into town. Something definitely up. We arrived home and Nicolas, the guard, said the church bells had been ringing. They began again in earnest when we were all back home. Toby went up to bed but called down excitedly that there was a fire in the city. From the upstairs terrace we could see the fire glow. It was in the general direction of the Archbishopric. In a short time a large fire broke loose not too far away. We stood there amazed to see it enlarge and apparently spread. The two minarets of Ayia Sophia stood out clearly in the red light. The church bells continued to clang calling to the Greeks to come against the rioting Turks. The scene was unreal but God knows the props and musical background displayed a grim reality. The fire engines appeared from all directions- out of the city, around this side of the wall and back into the city in the Famagusta Gate direction. It was difficult to tell whether they were racing away from the fire or towards it.