Dr J Sibthorpe arrived at the Monastery of Lapasis 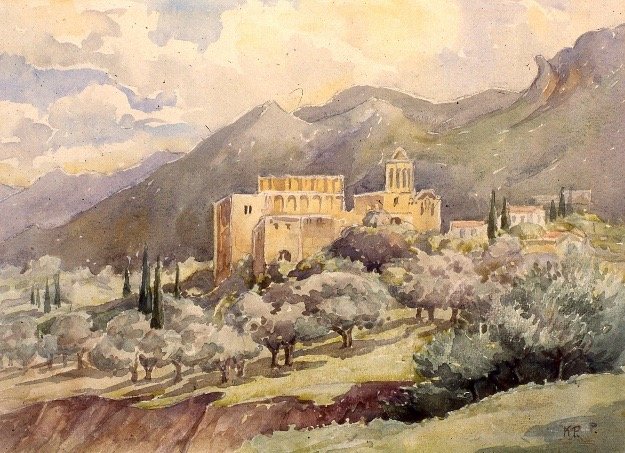 Dr J Sibthorpe arrived at the Monastery of Lapasis:

Having employed the morning in drawing, and putting our plants in paper, we rode out after dinner to the monastery of Lapasis, a fine remain of an old Gothic structure. In the court below was a sarcophagus, but of bad workmanship.  We were told that on the summit of the mountains to the left of Lapasis were the ruins of an ancient temple: our guides who had excited our curiosity refused to satisfy it, by risking their mules on the steep road which led to them. Captain Emery and myself attempted on foot to reach the summit of this distant mountain. The sun shone with uncommon force; nor did the least breeze mitigate the fervour of its rays. After a very hot and fruitless work, we came back, finding the summit too distant to reach it, and return before night. We joined our companions at the monastery of Lapasis, situated in a beautiful recess, surrounded by corn-fields and vineyards, and shaded by trees, whose foliage is kept green by several purling rills, that watered the environs of this romantic spot. I collected a few plants in this excursion: the Hedysarum saxatile grew on the mountain; and the Styrax officinale was frequent in the hedges near the monastery.