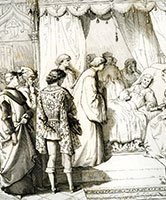 On the night of 6 to 7 July 1473, James breathed his last, after a painful illness lasting nine days. He was almost thirty three years old and he had been on the throne for almost thirteen years. He had always been robust and vigorous and at the time of the ill-fated hunting expedition was in excellent health. After his death the Venetian party at once accused Queen Charlotte’s loyalists of having poisoned him. The Catalan party blamed Andrew Cornaro and Mark Bembo. The Pope Sixtus IV, was quite convinced that it was the Venetians who had poisoned James. The King was given a simple burial; the last of the Lusignan line in Cyprus was interred with little of the pomp and ceremony usually bestowed on the passing of a King. There were not even candles as there was no wax to be found in Cyprus.

(Extract from Caterina Cornaro, ed by David and Iro Hunt, 1989)