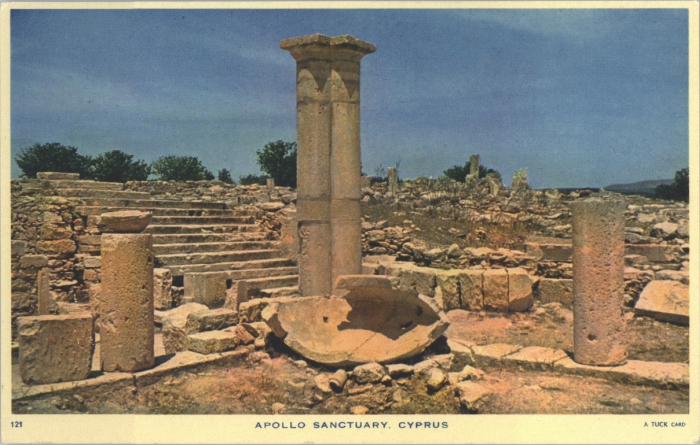 Hake, having come down from Salamis was excavating near Curium for the S Kensington Museum about now, and some highly interesting tombs were opened near the road between the old acropolis and Episkopi. I rode out on the 26th and was present when the best find of all was opened. It was Phoenician and its contents were as they had been left some two thousand odd years before. Mixed up with the crumbling bones of the deceased were a fine collection of glass and pottery – the iridescence of the glass being unusually brilliant. They had to be taken great care of as the action of the air speedily impaired them. Some of the vases too were fine, with the usual description of ring ornamentation on them. As the deposit was carefully brought to light and sifted several gold earrings, rings etc were found. This tomb was about 18 ft under the present level of the road and, unlike many others had never been despoiled. We lunched under the shade of some fine caroub trees with the glass and the pottery lying around us – the spoils of the dead. I wonder what aspect that bit of country with Curium and the sea for a background, presented so many years ago, when the dead were brought there for internment! In those days Curium must have been a flourishing little city. The results of the excavations were afterwards collected at the Limassol Konak, to be packed up for transport to South Kensington, and a goodly collection they made.