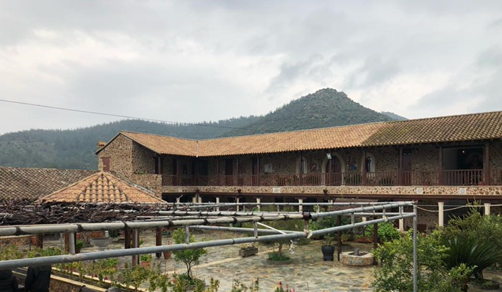 Captain Henry Light of the Royal Artillery visited the monastery of Ayia Thekla:

Unfortunately for me, so few military men had been seen as travellers in the east, that I was supposed employed by my government. I became an object of suspicion to the Franks and Turks, and of extortion to the Levantines. From this latter circumstance, I lost two opportunities of leaving Cyprus, by not acceding to the enormous demands made for my passage, and began to feel the effect of malaria. To counteract this I joined a party on the 8th of October, in an excursion into the mountains west of Larnica. The road lay at first through a plain in a dry gravelly soil, producing only olives, growing to a larger size than those I had seen in other parts of the Mediterranean: after continuing in the plain for three hours we ascended very gently for three more to the convent of Sta Thecla, where I slept during the night. I had in vain looked for cultivation: briers and olives were the only produce of the ground. A few rhododendrons flourished in the watercourses we passed. A miserable stone cottage now and then showed itself, where fig trees and vines were to be seen. The peasantry is ill looking. The men were dressed in a white canvass vest over a waist- coat of the same material, and a white linen turban on their heads. They wore the Albanian petticoat, similar to the Highland kilt, or the usual shalwar or breeches of the Turks, and high boots, used, as I understood, to avoid the fatal venom of the serpents of the island. I found only an old Greek priest at the convent of Sta Thecla, who from his dress I imagined was a peasant: he had two or three attendants with him. The convent was undergoing a repair, for the reception of an additional number of priests, and for a feast that was to take place in a few days in honour of the saint. I had supplied myself with provisions, and therefore did not intrude on him. He was an old man, of about sixty years of age, perfectly ignorant of all except his missal, which he could not read; he had learnt it by heart, it was all that was necessary. He was proud of his chapel, and pointed exultingly to the wretched daubs that adorned it. He left his pipe to repeat evening prayers, and having finished them took to it again. This seemed his only occupation. Though I had an interpreter with me I could gain no information as to the state of the peasantry in his neighbourhood: what I saw was wretched.