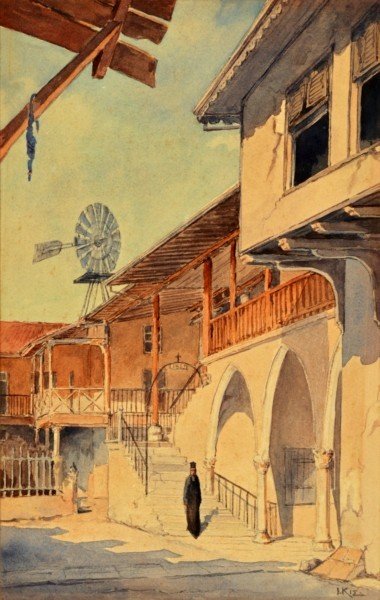 Captain for the East India Company John Macdonald Kinneir described his arrival in Nicosia where he was hosted by the Archbishop:

I entered the city by the gate of Lamica, and was conducted to the episcopal palace through a number of narrow lanes, where my horse was nearly buried in mud and filth. The Archbishop, dressed in a magnificent purple robe, with a long flowing beard, and a silk cap on his head, received me in the vestibule, and ordered an apartment to be prepared for me in the palace, a large and straggling building, containing upwards of a hundred chambers. These are all required for the accommodation of the bishops, priests, and their attendants; for the Archbishop, both in power and affluence, is the second personage on the island. All affairs connected with the Greeks are under his immediate cognizance and management; and consequently when the Governor is desirous of making a new arrangement regarding that class, or of levying contributions, he has recourse to the Archbishop, who has lately usurped the whole authority, and seldom even deigns to consult the dragoman. Erom the humble situation of an obscure deacon he raised himself, by extraordinary means, to the episcopacy: he borrowed immense sums of money from the rich, which he lavished on the poor; securing in this manner the votes of his creditors, that they might be repaid, and those of the others in expectation of future reward. He pressed me to remain with him for a short time, promising on this condition that he would procure the Mutesellim's boat to transport me from Cerina to Kelendri ; and as he was prepossessing in his manners, and far superior to the generality of Greek priests, I consented to postpone my departure for a couple of days. At seven o'clock supper being announced, he took me by the hand, and led me through a gallery into the refectory, a long and dirty hall: about thirty priests and bishops sat down to table. The wine and provisions were excellent and abundant, and the bread which was white as snow, and baked with milk instead of water, was the best I remember to have tasted.