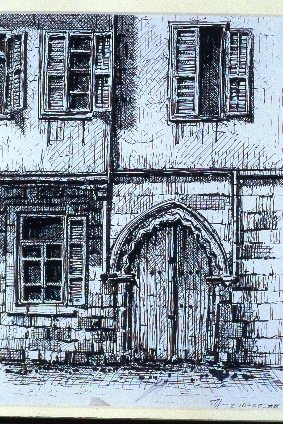 Captain Charles Colville Frankland  wrote of the architectural style he noticed in Cyprus:

I observed that in most of the houses at Larneca the ceiling of the large rooms is supported by a Gothic or rather a Saracenic arch. The beams likewise rest upon such wooden projecting supports or buttresses as we see in the old churches in England under the woodwork of the roof. Many of the houses have a kind of façade extending half the height of the house, of stone and of the same order of Saracenic architecture. I observed likewise several columns with such capitals and pedestals as we see in churches of the Gothic style.. I think that some antiquarians trace the origin of this style of building in England back to the days of the Crusaders, who are said to have found it existing in Cyprus and Palestine, and to have imported it into Europe on their return.