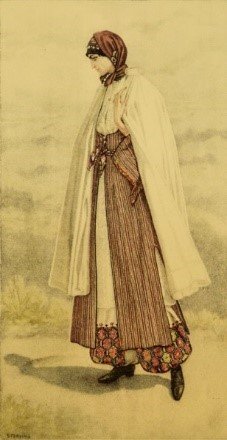 Captain Charles Colville Frankland comments on the “beauty” of the Cypriot women:

In the morning the British Consul came on board... I went on shore in the evening with Bailing. The Marina of Larneca is a wretched place consisting of a long row of mud-built houses with flat roofs: it has a bazaar and a castle. The palm trees which are thinly scattered about the back of the town give it a very Egyptian appearance, and I am told make it very much resemble Alexandria. The Consul sent his carriage for us, to convey us to his residence at Larneca, about three-quarters of a mile from the Marina. It was an open kind of Caleche drawn by one horse, just such a one as Gil Bias and his friend Scipion went down in to Andalusia, to take possession of his quinta at Leria. On our way out saw a few Cyprians. God only knows how this island ever attained its celebrity for beauty; for to judge of it from the specimens we saw one would have said it was the last place which Venus would have chosen in which to fix her favourite residence. I am told, however, that in the neighbourhood of Paphos (whose temple still exists) il y a le plus beau sang possible. The male part of the population is handsome and robust: and perhaps the laughing and wanton goddess had an eye to this circumstance. The Consular residence is spacious and cool. The old gentleman received us with much politeness and urbanity, offering us beds, &c. He has several daughters, but I in vain looked for a Haidee among them... Pipes and coffee employed the evening, and at about nightfall we returned to our bark.