Camille Enlart in "Gothic Art and the Renaissance in Cyprus" 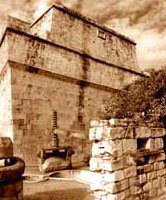 Camille Enlart in "Gothic Art and the Renaissance in Cyprus":

In 1425, in the course of the disastrous invasion which led to the captivity of King Janus, Limassol was one of the first places in the island ravaged by the Egyptian Mamelukes. They landed at Paphos and marched to Limassol burning everything as they went. They arrived on about the 10th August and laid siege to the castle in which the governor Stephen of Vicenza had shut himself up. The Mamelukes found a weak point in the defences and with the assistance of a heavy mortar made a breach there which gave them entry, sacked the castle, killed the Governor and carried off everything they found in it.