The American missionary Lorenzo Warriner Pease visited Alethrikon and Lefkara to look at a summer residence. He describes the place, the people and life conditions: 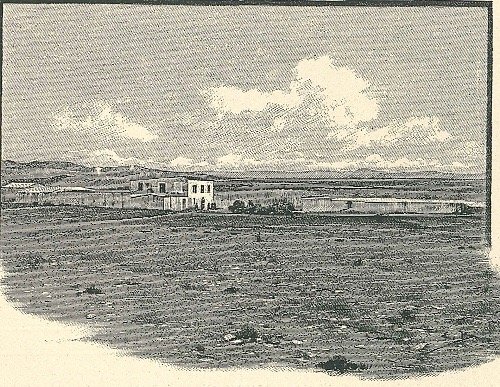 Br. Thompson preached an exegesis of the 1 Thessalonians 5, (his own). On the 24th Mr. Ladd and I went to Alethricon and Lefcara to look out a summer residence. At Alethrico, the Aga offered us the upper part of his house, and urged it on us with great earnestness. We however, went to Lefcara and there found one or two houses. Mr. Rizzini afterwards offered me his. The place is elevated, healthy, water and air good, population 650, people very frank and apparently friendly. The only objection is distance, which in Mrs. Pease’s present situation is very serious. We concluded to go to Alethricon, and then, if Mrs. Ladd cannot bear the climate she might go up to spend a month or so at Lefcara. We are to repair the Aga’s house in some respects. We told him on our return of this decision. There are only 6 men in Lefcara who can read and no school. Between here and Alethricon we saw the fields covered with locusts for about ¼ of a mile. There was scarcely an inch for most of that distance which was not covered with them.

Several of the inhabitants of Scala send their servants and their animals to Alethricon to bring water, as the water in the aqueduct has ceased, and that which is brought from elsewhere is very poor. Think of bringing a load of water 9 miles to drink!