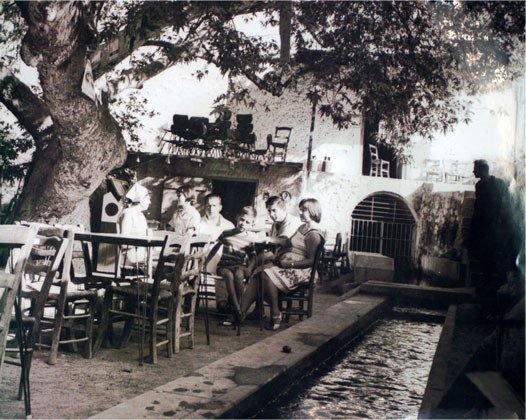 American Missionary Lorenzo Warriner Pease describes the scene among his hosts in Kythrea and Nicosia:

We had worship in Greek last night, but as we were in a Turkish house and our wagoneers were drunk, we had less than usual at worship. This morning while the wagons were being loaded we (except Mrs. Pease) rode up to Kefalovryson, the head stream where the water gushes out from the side of the mountain in a body more than two feet wide and one in depth. It receives accession also as it descents from other springs and crosses 27 miles besides watering the gardens of the mountain gorge. The chief products of the place are silk, olives, oil and flour. The silk is not so beautiful as that of Famagusta and is far inferior to that of Paphos. The village is in clusters extending about six mile sin length, and perhaps on the average about one quarter of an hour in width. We started about 9 o’clock for Lefcosia, Mr. Charalambos and I came in at 17 hours but the wagons were much longer in coming. We were well received at the Archbiscobate by the Archbishop etc. He had received intimations of our coming from his brother who was at Kythrea. Mr. Charalambos told me that the steward of the Bey at the chiflick last night had been a slave, but in the course of time had been freed, and had the chiflick given to him to take care of, and give such an account of the profits as suits him. He receives no wages. The Bey δεν καταδέχεται to pay him wages. But it is understood that he shall make a pretty sum. This is a common custom of the Turks. We can see how Abraham’s steward could become his heir.