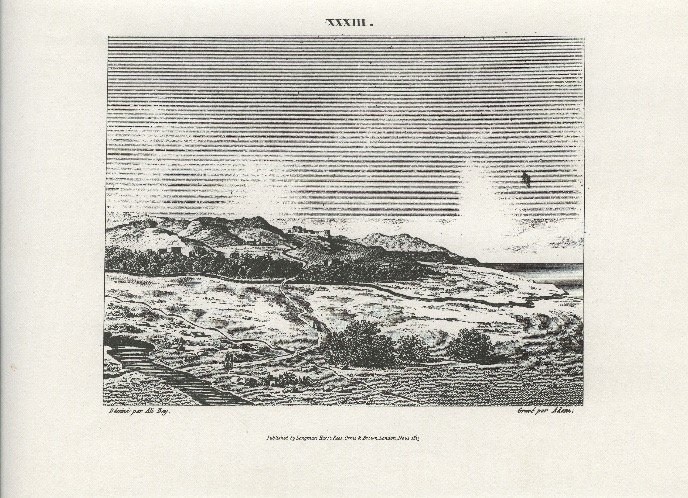 The next morning, April 27, I looked at some other catacombs or underground houses, at a little distance from Yeroskipos, and left for Couclia, passing by Coloni, Ascheia, and Dimi. In the second of these villages are the remains and a few entire arches of an old aqueduct, which supplied the sugar-works of the district… One very remarkable relic is seen amid the ruins of Couclia-masses of wall composed of two courses of huge stones, forming a base, and lying flat one upon the other: above these is another course of stones set on edge one beside the other, and forming by themselves the height and thickness of the wall. This colossal work looks as if it had been raised by the hands of giants. I could hardly trust my eyes, and tried at first to persuade myself that this mass was only petrified concrete. Its blackish hue and some signs of disintegration might help the illusion, but one cannot really by deceived. They are stoned, and stones of such huge bulk that one may get tired of wondering at the labour that must have been expended in transporting and setting them up. Is this a fragment of a Cyclopean work? Men say that these ruins and the mosaic of which I spoke just now belonged to a palace of Aphrodite. I admire the architects, and while contemplating the remains of this stupendous building, ascribed to a woman, I cannot help thinking of Catherine II, directing the transport of the base of the statue [Peter I., the grandfather  of Peter III] of her husband.