Ali Bey el Abassi was determined to visit all the sites in Cyprus that were related to stories with Aphrodite. He started with Amatante (Amathus) 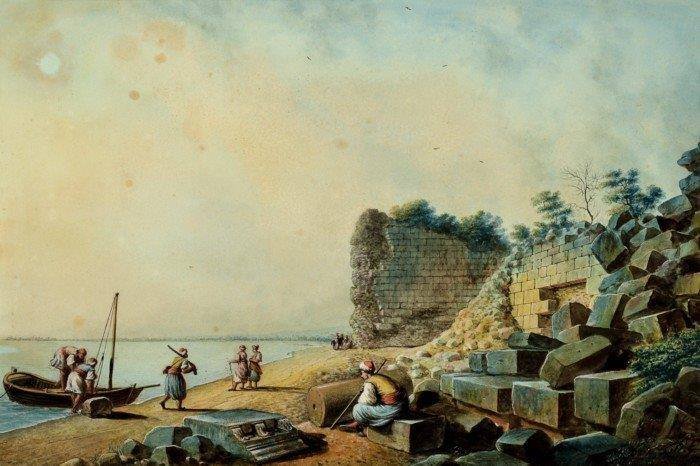 Ali Bey el Abassi was determined to visit all the sites in Cyprus that were related to stories with Aphrodite. He started with Amatante (Amathus):

Being in the country which has been embellished by the Greek poets in the charming adventures of the mother of love, I wished to visit the celebrated sites of Cithera, Idalium, Paphos and Amatante. I therefore, accompanied only by M. Franiondi, his son and four domestics, set out on the 28th March 1806, at five o’clock in the morning, directing our course towards the east. After crossing the river Amatante, which flowing southwards at a little distance falls into the sea, we soon met on the shore the ruins of the town, which I shall describe hereafter; and on following the direction of the road towards the N.W. we entered among the mountains. About noon we were overtaken by a hurricane and at a quarter past one we entered the village of Togni.

The most enchanting landscapes adorn the country I passed through this day. From Limassol, as far as the ruins, the road runs along the sea coast, and the land presents plains gently inclining and bounded by little hills. The whole is covered with the finest verdure: beyond the heights are seen a chain of lofty mountains, whose summits are covered with snow.

The soil is composed of a fat vegetable red earth, and is exceedingly fertile. The hills rise on each side of the road in gentle slopes, and are equally easy to ascend and descend; the fairest vegetation adorns the picture.

The village of Togni, the houses of which are ugly and ill built, lies in a very picturesque situation. It stands on the declivity of two hills; on the one are the dwellings of the Greeks, and those of the Turks on the other. Between them runs a small brook, over which there is a bridge of a single arch, on which stands the church belonging to the Greeks, dedicated to St. Helen.