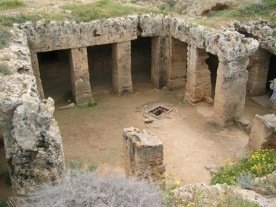 As I approached the town I saw at first nothing but a few scattered rocks standing alone in the plain. My surprise was great when I came up to them and examined them and found that each rock was dressed in the inner side with great neatness, and they formed regular houses! And how was it not increased when I found underground the semblance of a town dug out of the rock! The roofs of these subterranean houses are vaulted and low. Some have no arch at all. The walls are perpendicular, and carefully smoothed, and the angles neatly squared. Some of these buildings give the idea of a palace, with courts, galleries, columns, pilasters and all possible luxury of architectural ornament, all hollowed and carved out of the live rock with mouldings exquisitely finished, and a polish still perfectly preserved.