Alfred Westrholm to his mother 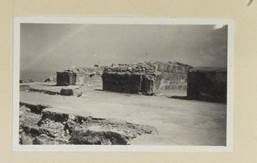 Alfred Westrholm to his mother:

Vouni is bustling with work. The most central portions of the palace are probably completed now and the railroad tracks are moved and altered as the various rooms are excavated. This week had brought no more remarkable finds, but the drawings, on the other hand, have increased greatly in number. The important thing now is to find as many appropriate cross-sections of earth as possible while excavation is ongoing. The final architectural drawings will have to be done later. The work force is about 40-50 men, using four wagons. The rail network is now quite developed. Tonight I am too tired, but for the next letter I hope to have a sketched plan of the entire area of excavated sections, and the other parts as I imagine them. You would surely appreciate also a drawing of the various places on the upper plateau here at Vouni.