Alfred Westholm, a member of the Swedish expedition to Cyprus, wrote about Menelaos Markides, the Director of Cyprus Museum 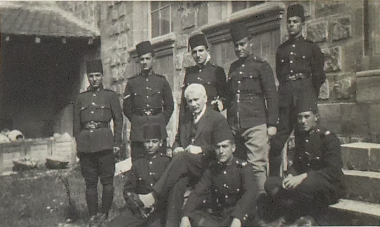 Alfred Westholm, a member of the Swedish expedition to Cyprus, wrote about Menelaos Markides, the Director of Cyprus Museum:

This was the last day that we were all together here. In the morning we held a little demonstration for the museum director Mr Markides of the winter’s work and at the same time of the remarkable finds from Miliá. He is a charming old gentleman, who nonetheless by some dreadful fate has suffered some paralysis in his jaw, so that he yawns about every three seconds. That afternoon we had tea at his home. His wife is fat and speaks only Greek but is very nice. After a long evening walk, we all gathered for a last dance in Gjerstad’s hotel room. It was every bit as delightful as always, even though one sensed departure nearing at every moment. Sometime in the wee hours we strolled home under the moonlight. It was the end of a long and excellent Saturday, Saturday before the holiday, a feast day… “a Soli-citous day” Gjerstad filled in. Yes, let us hope without all too many trying “Soli-cisms”!