Alfiros, of the Swedish Cyprus Archaeological Expedition, in a letter to his mother 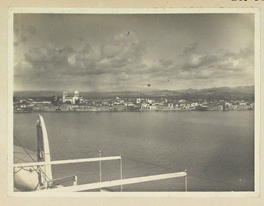 Alfiros, of the Swedish Cyprus Archaeological Expedition, in a letter to his mother:

The weather has until now been the most wonderful imaginable, but at a minor rain shower that came at the end of the last “downing” moon, the Cypriote roof tiles proved not to be watertight and one luncheon had to be eaten under a continual dripping. The roof has since then been re-laid, the tiles prepared, and this waning moon phase is awaited not without a certain suspense on my part at least, being responsible for the items belonging to the expedition here in the house. In recent days clouds have also gathered in the sky and through the nights the horizon has been ablaze with the most powerful lightning flashes. Several nights I have thus awakened as if the whole room was lit up and as though someone had made a fire in here. It is totally indescribable, such a spectacle. The sky and everything around us are not dark for one second. One could easily read without interruption in the glare from this lightning, and where the thunder storm is concentrated it appears as though an enormous perpetually burning flame of lightning rods reached halfway up into the sky.