Alexander Drummond, the British Consul to Aleppo and Cyprus, describes the Governor’s palace in Famagusta in a letter to his brother 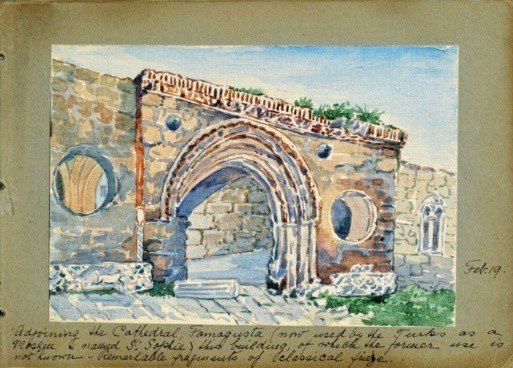 Alexander Drummond, the British Consul to Aleppo and Cyprus, describes the Governor’s palace in Famagusta in a letter to his brother:

Over the gate of the governor’s palace, which has been great but not noble, are the arms of Venice, with an inscription which I could not read, because it was overgrown with shrubs and moss; and these, the Turks, will not suffer to be cleared away, for they are jealous of they know not what; this, however, was no great disappointment: for, by the few words which I could trace, the purport of it was to signify at what time, and by whom the palace was built. I likewise saw another inscription in Gothic characters upon St Sophia, but it was at such a distance that I could not distinguish the letters. In the front of this church, upon the right, are two granite pillars, detached from it, with capitals and base of white marble; and between them stands a sarcophagus, adorned with festoons but altogether uninscribed; which is a very extraordinary circumstance.