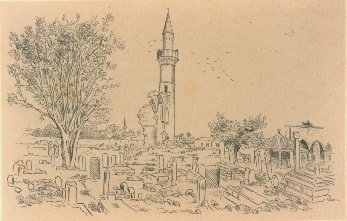 Two graves have been dug in the burying ground under my window. In one a Mohammedan has been buried. The same ceremony was observed as the other day. The corpse was brought in an open box wrapped in white cloths bound at the head and feet. One which was thrown over it was taken off and two men who stood in the graves took it from the open box and deposited it in its long home. Boards were then laid over it from the top of the grave diagonally to the opposite side of the bottom. These were covered with an old mat and the earth was heaped on. After it was filled, one took an earthen jug of water, as I supposed, and poured it on the top. In the meantime some women made their appearance, one of whom particularly made such lamentation, laying her hands on the grave striking her breasts and weeping. She was at last forced away by the men. After the grave was covered they all sat down in their hams, while one of them chanted, I suppose, a kind of farewell over the deceased, then all stroke their beards and arose.