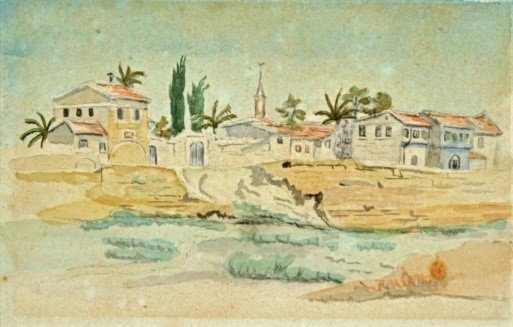 "The sixt day we rid to Nicosia, which is from Amacho seven Cyprus miles, which are one and twentie Italian miles. This is the ancientest citie of the Island and is walled about, but it is not strong neither of walles nor situation: It is by report three Cyprus miles about, it is not thoroughly inhabited, but hath many great gardens in it, and also very many Date trees, and plentie of Pomegranates and other fruites. There dwell all the Gentilitie of the Island, and there hath every Cavallier or Conte of the Island an habitation. There is in this citie one fountaine rented by Saint Marke, which is bound, every eight dayes once, to water all the gardens in the towne, and the keeper of this fountaine hath for every tree a Bizantin, which is twelve soldes Venice, and sixpence sterling. He that hath that to farme, with a faire and profitable garden thereto belonging, paieth every yeere to saint Marke, fifteene hundred crownes. The streetes of the citie are not paived, which maketh it with the quantitie of the gardens, to seeme but a rurall habitation. But there be many faire buildings in the Citie, there be also monasteries both of Frank & Greekes. The cathedrall church is called Santa Sophia, in the which there is an old tombe of laspis stone, all of one piece, made in forme of a cariage coffer, twelve spannes high, which they say was found under ground. It is as faire a stone as ever I have scene.”