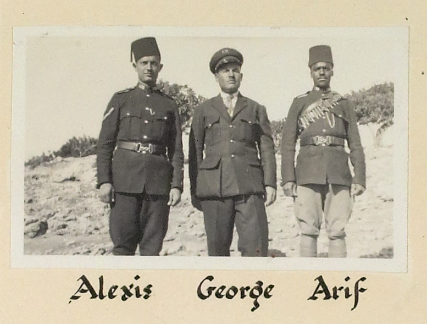 “To church in the morning. After lunch Alexis and I off on our bikes (A. is the orderly who came in place of Irfan and talks excellent English) to the village of Lakatamia where I looked at the church, bad, then leaving our bikes in a cottage we walked across country to Deftera or rather to a very quaint rock chapel on the cliffs of the far side of the river, very interesting with remains of medieval wall painting. Back about 6.00pm having collected lots of wild flowers. I was sitting in the gallery, reading about 9.15 when I thought I heard something. A minute later Hassan called me saying “The sentry has shot himself”. I came at once and ran to the sentry box and saw a body lying half in and half out. I struck a match and saw at once he was stone dead, there was a gaping hole in his throat and the bullet had come out through his face and had knocked all his teeth out. I looked at the rifle and saw the bayonet was missing, it was a clear case of suicide.

I forbade anything to be touched and telephoned for the P.M.O and C.C.P. I then went into HE who was sitting with Lady Storrs and said there was a paper from the C.S. I wanted to talk about. As soon as I had him in the office I told him and we viewed the body together. He then went back and I got the two silver candlesticks from my room and put them on the balustrade by the body. At last the doctor and C.C.P turned up, we re-examined the body and found a letter saying he had made up his mind to kill himself as he was suffering from syphilis. He wanted the £2 in his pocket to be given to his father, he was only a boy, about 20 years old and a new sentry I’d not seen before except that morning. I then got hold of Hart-Davis as he was the Coroner and at last got the body removed. I then had the place washed, it was swimming in blood, I then told the servants and said on pain of instant dismissal it was never to be mentioned to Lucy who is a nervous child. At last to bed. An unpleasant evening. The new sentry was in a terrible state of nerves and I made my orderly stay up with him, the corporal too, poor fellow, was in a cold perspiration.”