29 July 1571: Fra Calepio describes some of the last moments of Famagusta under Ottoman siege and the desperation of the people and soldiers having to be addressed by Marcantonio Bragadino 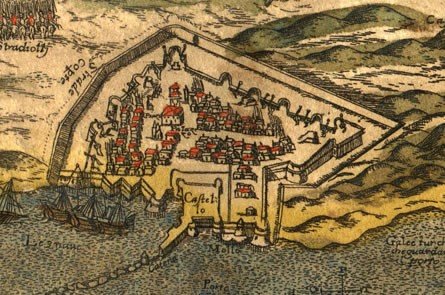 29 July 1571: Fra Calepio describes some of the last moments of Famagusta under Ottoman siege and the desperation of the people and soldiers having to be addressed by Marcantonio Bragadino

"Bragadino answered with words of consolation and encouragement, promising that help would come: allaying, as far as he could, the general terror that prevailed, and sending a frigate to Candia to announce the straits they were in.

The Turks had finished their mines, and fired them on July 29. In the meanwhile the defenders had been trying as usual to restore the parapets which the cannonade had shattered, and as there was no other material left the sacks were made of carisea under the superintendence of the Captain of Baffo. The three mines of the cavalier did great damage, throwing down the greater portion of the work, and killing the Grovernor Bondachi della Stratia. The mine at the Arsenal shattered the rest of the great tower, killing nearly a whole company of our soldiers: only the bases of the two flanks remained whole.

Fifth Assault: The enemy strove to take these two flanks, and to mount on the other batteries: the attack lasted from the twentieth hour until night, and very many Turks were killed. In this fight and others Signor Giacomo Strambali, a Cypriot noble, showed great valour, as well as Tutio Podochatoro, a Cypriot noble, who died bravely: his brother Alessandro, your brother Gioan Filippo Lusignano, and others of our nobles did their duty as knights, and with natural exasperation, for they had seen the slaughter at Nicosia. Your poor brother died eight days before the surrender of the city. May God give him Paradise."