25 July 1570: Gio Sozomeno was an engineer during the siege of Nicosia in 1570 and describes the Ottoman preparations around Nicosia. 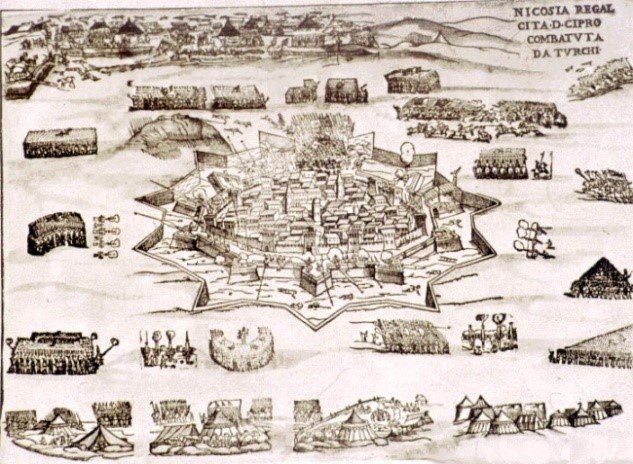 25 July 1570: Gio Sozomeno was an engineer during the siege of Nicosia in 1570 and describes the Ottoman preparations around Nicosia.

"A good witness to this is Signer Astorre, who told the whole truth about this letter at Famagosta in the presence of Sr. Niccolo Donato, chief officer, on board his own galley. So the stradiot cavalry which was with the Count of Roccas at the Salines retired to Nicosia as soon as the fleet arrived before the Salines, and remained in that city until the end. Part of the army without artillery appeared in the environs of Nicosia on July 25, and at once Colonel Palazzo da Fano advised and wished to make a sally with all the stradiot horse, the cavalry, the newly raised infantry, and part of the Italian and Greek foot soldiers, and to charge that wing of the enemy before the rest arrived (it came up next day with the artillery), showing that there was reasonable hope of effecting some signal success. Neither the Lieutenant and his Council nor the Coadjutor would consent, although among ourselves the said Colonel was esteemed as an officer experienced in war and completely trustworthy. The enemy’s forces were now all united, and their camp pitched without any resistance on our part. Five hundred horsemen only were despatched from the Salines to Famagosta, to keep that city strictly invested, and also to cut us off from all help which might reach us therefrom. They camped then with their tents on the open country, and on the hills of Mandia, where stood the pavilion of the Pasha commanding the expedition. They dug on the spot a well in which contrary to the general opinion they found an infinite supply of water. A great part of the army, and especially of the cavalry, was posted at S. Clemente, where is the spring which supplies the citadel, and there were tents also in the villages Galangia and Acalassa, five Italian miles away, for the convenience of the infantry which had halted there. The first thing the Turks did as soon as they were united and settled in camp was to come round Nicosia on horseback to provoke us to sally out and skirmish. But the Coadjutor and the Council would never allow us or the nobles (who were most eager to do so too, and were even by speeches and spirited letters showing that they wanted to meet the enemy) to leave the city; except once only, when Captain Cortese, a stradiot, was taken and killed."