23 April 1683: The Dutch traveller Cornelis Van Bruyn visited Cyprus and included in his travel journal some of the earliest engravings of the island. He managed to draw Famagusta from afar and described his experiences. 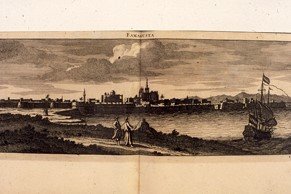 23 April 1683: The Dutch traveller Cornelis Van Bruyn visited Cyprus and included in his travel journal some of the earliest engravings of the island. He managed to draw Famagusta from afar and described his experiences.

The next morning I returned to the city, which I had been unable to examine from the landside on the previous day. Nearly a third of it faces the sea, and the circuit must be quite half a league. It has two gates, one on the landside, another looking seawards. The ramparts, which are nearly perfect, are surrounded by a dry ditch, of considerable depth and cut in the rock. They are said to have been built after the fashion of those of Rhodes, but are very far behind them in beauty and magnificence. The mosque called S. Sophia seems very fine: it must indeed be as grand as its reputation. The pointed tower, which crowns the building is highly ornamental. On the left of it is another mosque whose dome makes it very conspicuous. One can see the holes left by the cannon balls: half the church was destroyed in the siege.

The harbour lies along the walls of the fort. Its entrance is so narrow that vessels are obliged to take in their anchors, and galleys their oars. The Turks guard the city so jealously that no stranger is allowed to set foot in it, except perhaps when his Consul comes to salute the Pasha, who visits it occasionally with his galleys. Even the Greek inhabitants of the island dare not approach the ramparts, or if caught they run the risk of being forced to become Musalmans.

There are five villages round the city, some of them pleasantly situated among trees. There is much silk, and the trees are chiefly the white mulberry which give food to the silk- worms. The yield is about eight thousand okes, or twenty thousand Dutch pounds.