20 July 1836: Lorenzo Warriner Pease was exploring the countryside of Cyprus, amazed at the beautiful views he was confronted with. 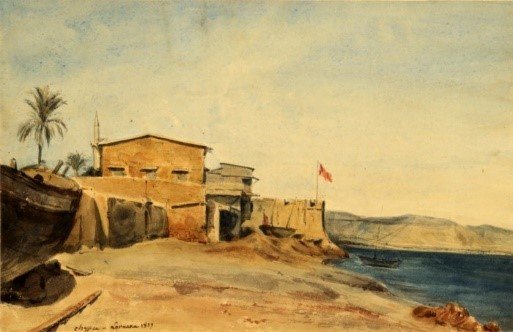 20 July 1836: Lorenzo Warriner Pease was exploring the countryside of Cyprus, amazed at the beautiful views he was confronted with.

“Vines begin to bear small grapes in the third year and to bear good ones in the fourths. The hills in this neighbourhood have been terraced, probably for their cultivation. We rode to a table mountain with Mr Thompson and the Aga’s glass. We had a complete view of Larnaca, Scala, Salt Lake, a mosk on its banks, Cition, castle, garden and quite a number of villages as well as numerous churches and a plain of several miles in extent, under pretty good cultivation.

It was a delightful view and it was heightened in its effect by the flight of several eagles majestically away. I often wonder that no one has selected any of these hills either for cultivation or residences. The only difficulty is the want of water.

But it might be procured near and be preserved in cisterns from the winter rains. If this difficulty were only obviated, these hills might be made most admirable residences for the summer, especially, as there is almost always plenty of air upon their tops.”