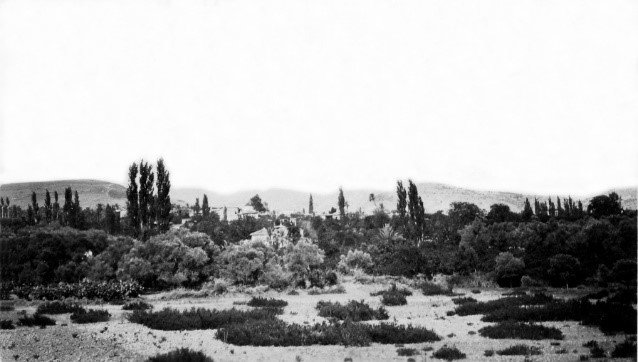 “At a quarter past six we mounted and set off. For one hour and a half we continued on the same plain along the sea-coast. It was everywhere rich and cultivated, abounding in com, melons, some few vines, olives, mulberries and figs, which were growing close down to the sea. To our right we had the bay, and to our left the large Turkish village of Levka. In the bay were anchored three large boats, which came here for the facility of smuggling corn.

We crossed a broad though dry bed of a mountain-stream, filled with the finest oleanders and cistus, from which the spot derives the name of the Xeropotamos, dry river. At eight o'clock we ascended the mountains, which showed us by far the most beautiful scenery I have seen in Cyprus. They were very high, sometimes of earth and sometimes of stone (which latter had a red volcanick appearance), covered above with pines, oaks, caroba trees, all of the largest dimensions, except the oaks which were dwarf, and brushwood, and with the richest verdure.

In the deep valley below ran a considerable mountain-stream, which was crowded with, and frequently hidden by, immense plane trees, oleanders, cistus and brushwood, among which latter were great quantities of blackberry bushes : our road sometimes lay along the top of these mountains on roads over- hanging tremendous precipices, whose abrupt fall was softened by the trees growing out of their sides, and sometimes along the banks of the stream below, whose murmuring was an agreeable accompaniment to the beauty of the prospect. Many burnt trees were lying along the mountains and across the valleys, of which the peasants make great quantities of charcoal, and this forms a considerable branch of commerce between Cyprus and Alexandria. At a quarter past ten we stopped under a large plane tree by the side of the stream, where we dined, and repaired our last night's bad rest by a two hours' sleep. At half past twelve we set forward again, not fearing the sun, as our road was completely shaded and frequently darkened by the copiousness of the foliage around it. At two o'clock we came to a part of the mountains which was cultivated, where we found superlatives wanting to express our admiration. The whole valley and the rise of the mountains, covered with rich reddish mould, were everywhere crowded with vines, mulberries, olives, figs, planes, oaks, brushwood and fern. This continued for the rest of to-day's journey, and a considerable quantity of wine is made here.

The villages in the neighbourhood (except Levka, all we saw to-day) were Morgon, Xakithira, and Ampeli. These (though small, yet all built of stone) formed a pretty addition to the scenery, whether perched on the top of the mountains, or half hid by foliage at the bottom of the valley. The inhabitants were all black with the juice of grapes, which they were washing in the stream below. At half past four we saw the bay of Levka behind us: for the last hour we rode along the tops of high mountains on roads that overhung tremendous precipices, whose pine-clothed rock formed a magnificent contrast with the luxuriant cultivation of the valley below.”