18 August 1571: Ioannes Cotovicus from the University of Utrecht and in Cyprus in 1598, describes what happened to Famagusta and quotes the text from Marc Antonio’s tomb. 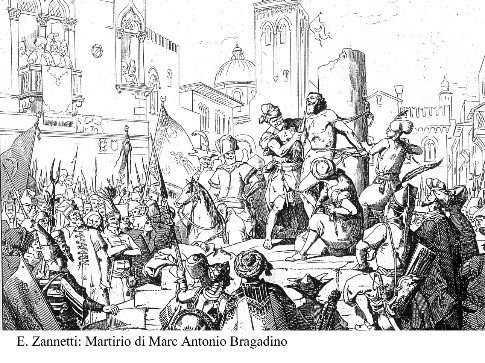 18 August 1571: Ioannes Cotovicus from the University of Utrecht and in Cyprus in 1598, describes what happened to Famagusta and quotes the text from Marc Antonio’s tomb.

A like fate befell Famagusta. After the capture of Leucosia, the Turks rapidly moved their camp and hastened to the siege of Famagusta. They took it, but not with the same ease, and only after a year's siege, in which they lost seventy thousand of their men.

Want and hunger drove the inhabitants to surrender, after they had first bargained with the Turkish general Mustafa for the lives of all. But when Marcantonio Bragadino and Astorre Baglione the generals, with a following of many captains and nobles went forth from the city to his camp to present the keys of the gates and to ask (as had been agreed) for leave to depart, he caused them at first to be brought to his tent, received them kindly, and praised their courage and their zeal in defending for their Prince so noble a city. Then a sudden fit of rage seized the cruel savage, and in violation of his plighted word and of the common law of nations he not only ordered Astorre Baglione, a man of noble birth and a distinguished soldier, and other leaders to be beheaded, while their followers were attacked and massacred by the arms of his guards and the spears of the janissaries, but caused Marcantonio Bragadino, the general in command of the city, a man illustrious among the nobles of Venice for his passion for arms and singular courage, after his ears were cut off, to be brutally flayed alive by a Jewish hangman — a spectacle of hideous and unparalleled barbarity. In the sight of the whole city, amidst the sharpest torments, his courage and constancy, and the calmness of his bearing and look shone so fairly forth that he seemed rather to rejoice than suffer. But the barbarian monster was still unsatisfied, and bade them stuff his skin with straw, and hang it on a mast, and so bear it to Constantinople. After many years had passed, his brother and sons bought it for a great price, carried it to Venice, and saw it laid in a marble urn in the church of SS. Giovanni e Paolo, with this inscription to the memory of a most fond father, and a leader of undying fame.

The skin of Mark Antony Bragadino, torn from him while alive and suffering fearlessly, by the faithless hand of the enemy, on the eighteenth day of August, in the year of our Salvation 1571, when, in the Cyprian war waged against the Turks for faith and fatherland, he was overborne in the long siege of Salamis, where he commanded with constancy and valour, was brought hither from Byzantium by the care and at the cost of his brother Antony, and laid here by his devoted sons Mark, Hermolaus and Antony, to the eternal glory of God most High, of their country, and their father's name, in the year of our Salvation 1596. He lived forty-six years.