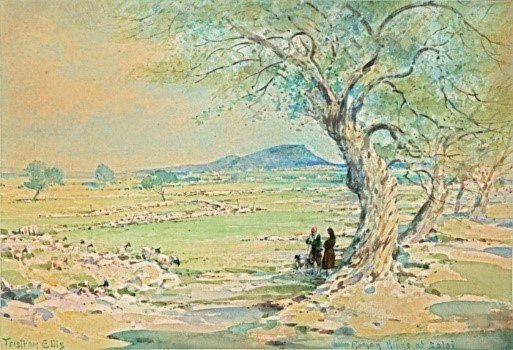 “In conversing with Mr Kyprelli the other day, he said that there were 2000 slaves in the island and 50 free blacks. He had one who cost 1000 piastres. He was surprised when I told him the value of slaves in America. Will not olives grow in Virginis etc? This afternoon I took a walk for the purpose of looking at the ruins of the old town. The ditch is very distinct. It extends into Larnaca some distance. The ruins extend to the ditch and are several feet thick. Many holes are dug for the purpose of procuring stones. I found many shells which were as fresh as though they had recently been thrown up from the sea shore. I also found several specimens of isinglass and of alabaster boxes, which had been thrown up. I also discovered a broken ancient idol, which was the upper part of a female figure. It was Egyptian in its origin.”