15 April 1929: The Swedish archaeologist Alfred Westholm was feeling a bit homesick and his friend and boss, Einar Gjerstad came to his rescue. 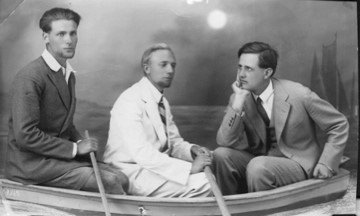 15 April 1929: The Swedish archaeologist Alfred Westholm was feeling a bit homesick and his friend and boss, Einar Gjerstad came to his rescue.

On Friday Einar came here and continued on to Polis on Saturday. He brought mail, newspapers and other nice things with him. From Father’s letter I saw that what I had suspected, namely that Mother would be celebrating her 60th birthday on 14 April, was all in fact true. I immediately inquired to Einar about the possibility of getting a telegram sent off. He thought for a moment, and then very characteristically answered, “We will go to Paphos tomorrow. There is a telegraph station there.” It was however a journey of about 15 Swedish miles of horrendously bad roads, and I wanted to protest going, but he only smiled and said, “For your mother’s sake, Alfiros, I want to do it, and for yours as well. You have never been there!” I could hardly answer anything to this, but I wish that Mother, on her 60th birthday, could have seen how both of our eyes shone when they met! Einar surely knew which sensitive point he had touched me, and for the entire trip he made great efforts to make the day into a party that I would never forget. I hope he understands how well he succeeded!