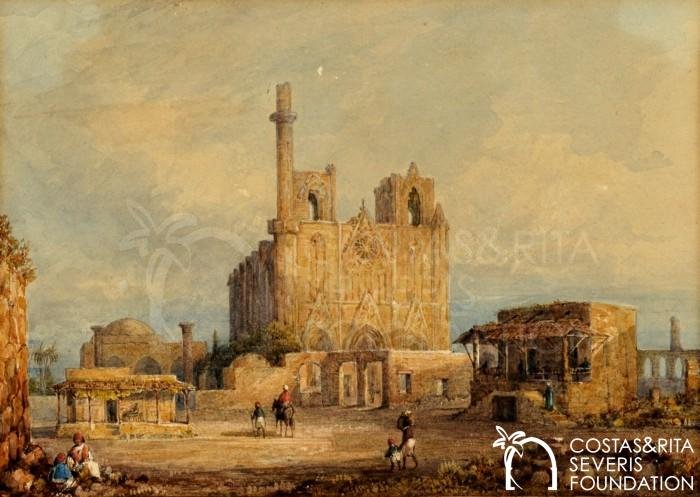 The Mosque at Famagusta, Cyprus

Inscribed on label verso: The Mosque at Famagusta - Cyprus

This is a view of Famagusta town and, specifically, of the main square. From left to right, is the domed Moslem school. In front of it, and behind a shack, stand two Corinthian columns where, legend has it, Marcantonio Bragadin, the Venetian defender of the town, was flayed alive by the Ottomans in 1571. In the centre, are the Latin Cathedral of St Nicholas (Lala Mustafa Pasha Mosque) turned into a mosque and, in the background on the right, the ruins of the Orthodox church of St. George of the Greeks. The colours of the buildings reflect not only the colour of the local Cypriot limestone but also sadness and poverty, feelings strengthened by the absence of vegetation. Apart from a little green in the inner courtyard of the Latin Cathedral of St Nicholas (Lala Mustafa Pasha Mosque) and several palm trees in the background, no other vegetation is to be seen. The straw-matted roofs of the huts in the courtyard and their humbleness accentuate the sense of desolation. In the foreground, can be seen the water-well of the town. Of the fourteen figures depicted, twelve are Turks. The Greeks were expelled from Famagusta after it fell to the Ottomans in 1571 and were not allowed to live within the walls or enter the town on horseback. Therefore, the figure riding a horse must be a Turkish dignitary being led by his servant towards the Cathedral. The servant wears white pantaloons of the typical Turkish costume. A black man carries a pot on his shoulder and holds a child by the hand. The black man was probably a slave brought to Famagusta either from Turkey or Egypt since the town was used as a penal colony for exiles and criminals. The figure climbing the steps of the coffee shop on the right can be identified by the long blue robes and white turban as a hodja, a Moslem cleric. More figures are sitting on the verandah of the coffee shop. They must all be Turks as Greeks were not allowed to mingle with them. The only figures that could be presumed Greek are the two in the left corner of the picture squatting far apart of the rest. They wear the Greek foustanella, that is, a white and much pleated skirt, and white shirts under red and blue waist coats. On their head, they wear the red cap with a heavy black tassel. This costume is identical to that of the mainland Greeks and was not worn in Cyprus. Arundale used this group to pass on his own perceptions about the two peoples on the island. The Greeks, being the subject people, are placed on the periphery of the scene. The monuments in the picture, bathed in a haze, somehow relate the historical realities of Cyprus in colour and subtle representation. The painting is almost monochrome, the yellow of the stone and the earth projects a pervasive sense of desolation and degradation reflecting the period. Orthodox, Latin and Moslem monuments tell a story of the Christian past and the present desolation in a picturesque view that is loaded with associational meaning.

The Costas and Rita Severis Foundation holds or manages the copyright(s) of this item and its digital reproduction. If you need information about using this item, please send an email to research@severis.org

We're always looking to improve our records, so if you have any information about an object or recognize any of the people, locations, monuments in the photographs, please give us details in the form provided here. 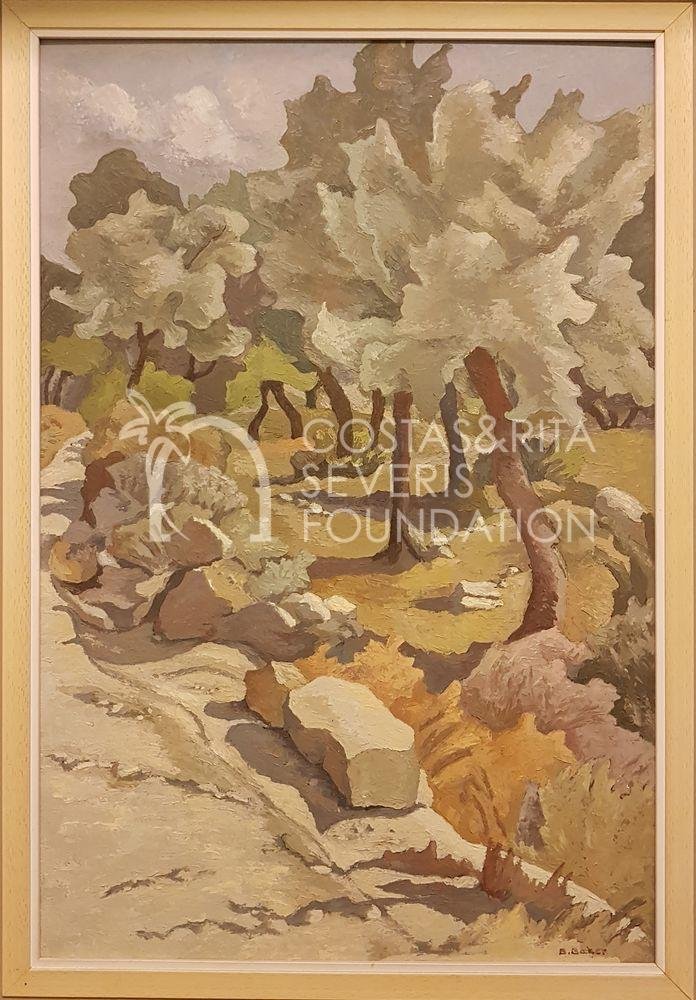 The large canvas shows the well known silver-leaved trees of the island. The countryside is scattered with hundred year old …

The large canvas shows the well known silver-leaved trees of the island. The countryside is scattered with hundred year old …