This week’s post is inspired by the visit of cosmonaut Yuri Gagarin on 14 February 1962 to Cyprus.

A Russian cosmonaut was the first human to journey in outer space, achieving a remarkable milestone in the Space Race, the unofficial war among the Soviet Union (USSR) and the United States of America (USA) during the Cold War years. Vostok 1, Soviet Union’s spacecraft, successfully completed one orbit around the earth on 12 April 1961.

After the completion of his space journey, Gagarin became a national hero and an international celebrity. Having gained the reputation of a public figure, Gagarin accepted invitations by 30 countries and made an international tour.

Cyprus was one of the stopovers during his travels in 1962. The cosmonaut was in an open car waving to the crowd lined up in the streets of Nicosia, being received with enthusiasm by all Cypriots. He visited Archbishop Makarios and then Limassol city where he received from Glafcos Clerides, as an honour, the key of the city.

The Glafcos Clerides library in the CVAR includes a copy of the book ‘Doroga v kosmos : rasskaz letchika-kosmonavta CCCP [The road to space: the story of the cosmonaut CCCP]’ written by Gagarin in 1961 which he signed and dedicated in the Russian language to Mr. Glafcos Clerides: ‘To Mr. G. Kl in the memory of visiting Cyprus. 15.02.62’.

On 9 May 2014 Yuri Gagarin’s statue was unveiled in Nicosia’s Public Gardens to commemorate the visit of the first cosmonaut in Cyprus.

Location: Library of the Centre of Visual Arts and Research (CVAR) 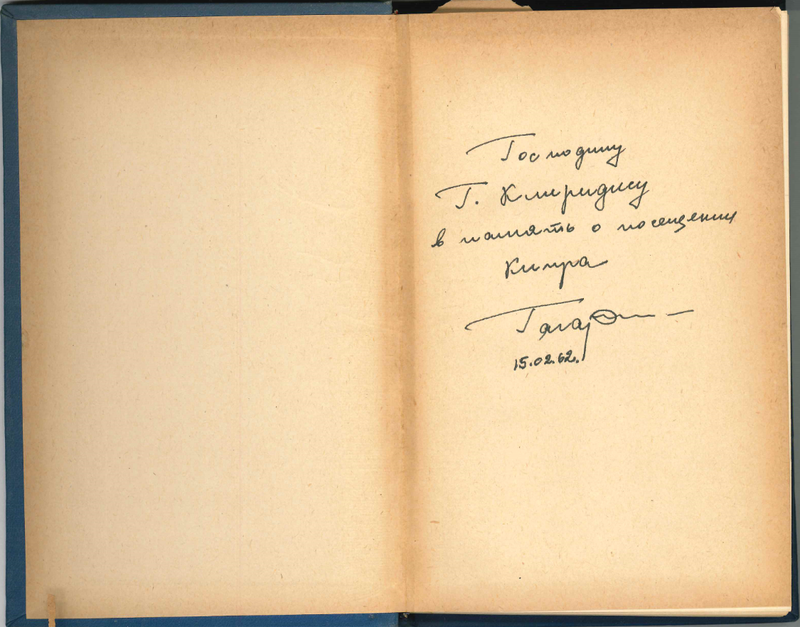