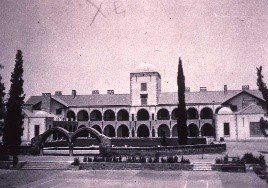 There are various reasons why I never felt happy at Government House - I think I must have been the exception to the rule - but whenever I was there I always used to think of Marie Antoinette at Versailles, when she was told that the rabble marching towards the Palace were crying out for bread and she asking: But why don’t they eat cake? In Nicosia I used to see too many poor and squalid houses and on the Cyprus plain too many villages where life was primitive, to be able to forget about them when I was at Government House. I think if Government House had been in Nicosia with the slums jostling up to its walls, I would not have felt this so much, but away on the rising ground, away from the heat and the dust of the city, Government House seemed too quiet, too serene, too detached from the realities of Cyprus, and the distance separating it from the hardships of the island seemed to be emphasized by the fact that I never saw at Government House representatives of the common people. Never once did I see a Labour mayor or a trade unionist at a Government House function.

One such function was the garden party, one of the entertainments given by Sir Charles Woolley during the peace celebrations, attended by a vast concourse of English and Cypriot civilians from all over the island and by many army and R.A.F. officers and a sprinkling of naval officers – for Cyprus is no Malta. I remarked to the wife of a Cypriot editor that Government House was a fine place to hold large parties. Sadly she replied: “Yes, and we were taxed heavily for it.”

Government House in Cyprus stands about a mile from the Secretariat offices. In other Colonies too, provided the colony is big enough, Government House is usually situated at least a mile from the Secretariat. I believe this is done for two reasons and two reasons only: to make it administratively inconvenient for files and indeed officials to travel from the Secretariat to the Governor’s sanctum, and secondly, to shut the Governor off in an ivory castle, thereby contributing to a deification which most Governors could in no other way attain. Deification of Governors, which has a long anthropological history, was for a long time an integral part of colonial administration.